The Power of Data: Exploring Architectural Language through the Use of Artificial Intelligence

The Power of Data is an exhibition created in a virtual building, conceived by three-dimensional geometries based on various artificial intelligence algorithms. The project was created by the OLA (Online Lab of Architecture) team of research architects formed by Jennifer Durand (Peru), Daniel Escobar (Colombia), Claudia Garcia (Spain), Giovanna Pillaca (Peru) and Jose Luis Vintimilla (Ecuador). 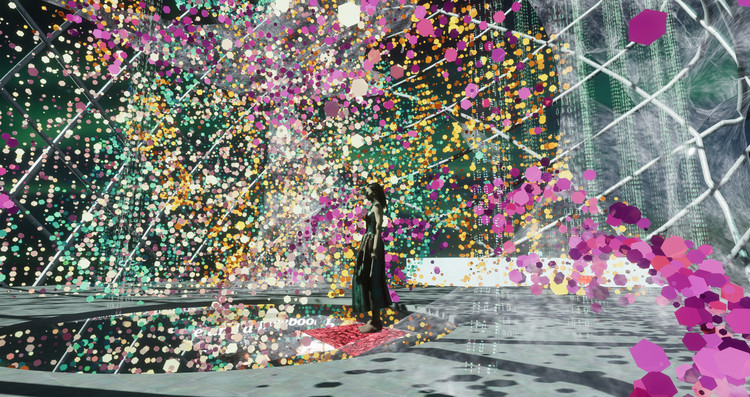 The project is based on an analysis of the invisibility of data and social networks, which have increased their use in people’s daily lives. Who has the power of data? Where is the data stored? Am I in control of the information I share? These are some of the key questions from which the project is born. The potential power of social networks and their growth stems from two factors, taking advantage of the human need to communicate and socialise with others. For the concept is based on the assumption that people have a “physical self” and a “virtual self”.

In general, The Power of Data is an immersive and interactive experience, as it allows the simultaneous connection of different users in the virtual space. Therefore, an in-depth study of the spaces, sounds, lighting, dynamic textures and types of routes that enhance the sensations and interactions between the user and the building was carried out.

Firstly, the project focuses on collecting data that will be used in the artificial intelligence algorithms. The data was collected from various social media profiles, from which four Artificial Intelligence (AI) algorithms were run: Cyclegan, Stylegan, Resnet and VQGAN + CLIP.

The final result is a building created by data and coding processes in different design and 3D modelling programmes. The tower created has the following characteristics: a structural grid, data vectors that run completely through it, thermal insulation and a 3D printed graphene structure. In this same way, 5 interactive sculptures were created, which transform the information obtained from social networks into geometry, creating a visual way of identifying the data. In addition, lifts, teleporters and musical instruments were designed as interactive components.

When you enter the virtual building, the first space that welcomes you is the lobby, where you can find ramps, lifts and the model of the building as a guide. The tour begins with the basements containing the laboratories. It is in the first basement that the process of creation of the building is explained through an exhibition of images. On the second level of the project, the process of creating the sculptures and handling the data is explained and exhibited. Finally, on the third level you can visit a sample of the images resulting from the artificial intelligence processes applied.

The virtual reality (VR) project offers two means of experimentation. The first is through smartphones, laptops and PCs with a 360-degree walkthrough. As a second option, it can be accessed with Oculus Rift and HTC Vive virtual reality viewers to experience an experiential virtual environment of computer gaming.

It is through this project that the OLA team manages to understand and realise the visualisation of data through various three-dimensional forms. It is for this reason that the architects hope that the development of The Power of Data will serve as an incentive to open up new possibilities for exploration in the field of current architectural language.

This article is part of the ArchDaily Topics: The Future of Architectural Visualizations, proudly presented by Enscape, the most intuitive real-time rendering and virtual reality plugin for Revit, SketchUp, Rhino, Archicad, and Vectorworks. Enscape plugs directly into your modeling software, giving you an integrated visualization and design workflow. Every month we explore a topic in-depth through articles, interviews, news, and projects. Learn more about our ArchDaily topics. As always, at ArchDaily we welcome the contributions of our readers; if you want to submit an article or project, contact us.

dental, health & fitness
We use cookies on our website to give you the most relevant experience by remembering your preferences and repeat visits. By clicking “Accept All”, you consent to the use of ALL the cookies. However, you may visit "Cookie Settings" to provide a controlled consent.
Cookie SettingsAccept All
Manage consent